Between 1998 and 1999 I started a course on Computer Science (see here) and learned C. At that time, I was writing codes to solve other problems not related to computational biology.

Last year, I started a postdoc at NESCent. There I was finally able to increase my computer programming skills, but this time solving problems on computational biology.

But why have I decided to increase my skills in programming?
Since I started my course on Microbiology and Immunology I have always been working generating and analyzing DNA sequences of mammals, virus and bacteria. But as time was passing the ability of generating data was increasing at a very high rate. Nowadays, generating hundreds and hundreds of base pairs are cheaper and faster. We have now so much data to analyze that I decided to increase my skills in programming to be able to manipulate and analyze large data set, which are very common in the scientific world these days. We also need to create new methods to efficiently analyze and understand all these data.

At NESCent, I decided to learn Python. The reason for choosing Python was because I took some lessons while in Brazil and I ended up getting along really well with Python. It is a very easy and straightforward language to learn if you are a beginner.

I used and I still use several sources to learn Python and other languages:

1. The Codecademy website is very good for learning the basics in Python. It is not focused to Biological problems, but it does a good job to “teach” the basic you need to know in Python. You can also learn other programming languages using the Codecademy. 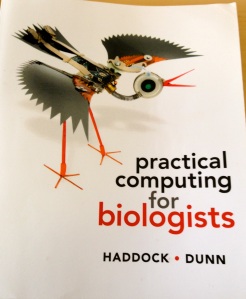 2. I also used the book “Practical computing for biologists”. It is a very clear book for biologists, and it explain Python and other stuff useful for computational biologists, including a good explanation on Regular Expressions. I totally recommend this book if you are a biologist and new to computer programming!

3. When starting solving the problem of simulating the replication of endogenous retrovirus, I also used the StackOverflow website. Many common questions are already explained in this website. If not, you can post your own questions.

4. Finally, I have recently decided to learn Java. For that I am using the Udemy website and the course I am doing is here. So far it is very good!

I have also learned R. But after learning Python, R is very straightforward. I did some of the tutorials from the R website, and searching for more information using Google. Usually I use R to make plots and to do some statistical analysis.

Once you learn one language, the others became easier to learn.

For the past few days I was off to the Evolution conference in Raleigh, NC…

Oh well, not far from my new home in Durham…

BUT I have to say that it was the best conference I have ever been to date! I’m not saying that because NESCent was organizing it, but because it was really well organized!

OMG! so much delicious food and beer. Ok, I don’t drink alcohol, but I think many people were very happy with everything! And of course a luck person got all my beer “free ticket”! And the best quote I’ve heard “Today I ate a cookie the size of my face!” (By Assif Tamuri). I have to say I ate TWO cookies the size of my face, and I don’t know where all these calories went to!

In the first day I went to the trip organized by the conference to the Singletary Lake/ Lake Waccamaw/Green Swamp. Although it was a very hot day, iIt was a very nice trip. We left Raleigh Convention Center at 6:30am and arrived back at 11:00pm.

We first visited the Singletary Lake …

… where we saw many animals.

Then we went to the Lake Waccamaw.

And we also saw an alligator (how cool was that?)!!

And finally we went to the Green Swamp where we saw many beautiful plants! From orchids to carnivorous plants.

The Evolution conference had many interesting talks and I also gave a 15min talk on the Evolutionary Dynamics of Endogenous Retroviruses by Computer Simulations.

It end up with a Super Social at the North Carolina Museum of Natural Science. It was the greatest idea ever!

Next year the Evolution conference will be in Brazil!! My home county! You should all take a week off and visit Rio!!

Just for a taste of the beauty of Rio!!

Make a plan! Rent a car, and drive from Guarujá to Paraty and then to Rio!

My primary research interests are on endogenous retroviruses (or ERVs).

But what are ERVs?

Let’s go back: What is a virus?

Viruses are very small entities that are only able to generate other viruses by being inside a living cell of any other living organism, such as animals, plants and bacteria. They are of many different types and sizes and if you want to know more about viruses you can have a look here.

As other animals, viruses also have a genetic material, but in their case it can either be DNA or RNA. This genetic material is responsible to carry on information for virus replication once inside a living cell.

Retroviruses are viruses that have RNA as their genetic material, instead of the more conventional DNA. The interesting part of retroviruses is that they can convert their RNA into DNA. This DNA is then integrated into the organism’s DNA they are infecting. Once the retroviruses DNA is integrated, they are called proviruses (just because we humans like to give names to everything).

So let’s go back to the question: What are ERVs?

ERVs are retroviruses that at a point in the past infected a host animal cell and by an unknown reason these retroviruses end up infecting sperm and egg cells. After, the host started to pass these viruses to their offspring. They can be considered viral “fossils” and even us humans have these viruses in our DNA.

I am currently working on the evolution of these viruses, and this will be the topic of my next post!

ASSEMBLING, VISUALIZING, AND ANALYZING THE EVOLUTIONARY TREE OF LIFE
An Evolution-Themed Film Festival

evolution through a lens

An inspiration to protect the tropical biodiversity